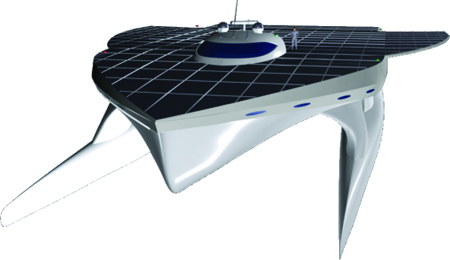 France’s PlanetSolar is planning to design the biggest solar run ship in the world. The solar-powered catamaran or a multi-hulled ship is on the drawing board of a project taken by PlanetSolar using Autodesk’s digital prototyping technology. The ship will travel around the globe beginning in 2010. It is still in design stage but the project’s goal is to navigate around the world at an average speed of 10 knots. The vessel will be built by the Knierim Yacht Club of Kiel, Germany and will be operated by two sailors. The boat will also be able to accommodate more than 50 people during the planned publicity stops at various ports.

PlanetSolar will sport 470 square metres of photovoltaics, will be 31-metres long and will be able to produce up to 103.4 kilowatts of solar-based electricity for operations. It will cover 25,000 miles and is expected to take around 120 days.
Source