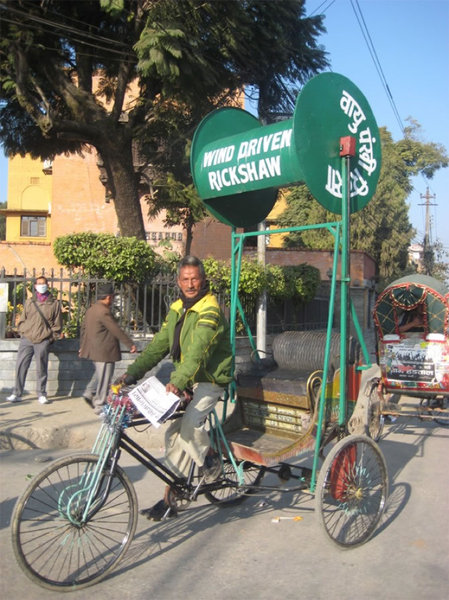 We’ve seen and heard of cars, aircrafts and boats powered by solar power and electricity before. The last time we heard of a mode of transport being powered by wind, was probably an old sail ship. Well, one guy in Kathmandu, Nepal thought differently. He hooked on a windmill to his pedicab-a type of rickshaw-to power it up. Using a never-applied before wind-human hybrid concept, this rickshaw driver has sure left everyone with their jaws dropped. There’s so much a little bit of wind blowing in the right direction can do, including thrusting a pedicab.

The driver wanted a cab, easier to peddle, to earn his livelihood. So, he used the help of a professor to build a windmill for his rickshaw. The windmill helps with an additional thrust, and as the drum rotates, it assists in acceleration. By connecting it to the rear-wheels, this pedicab is a lot easier to pedal. The rickshaw sports a large “Wind Driven Rickshaw” sign on its windmill. The concept might seem weird at first, but then again, it’s highly practical too!
[Wired]