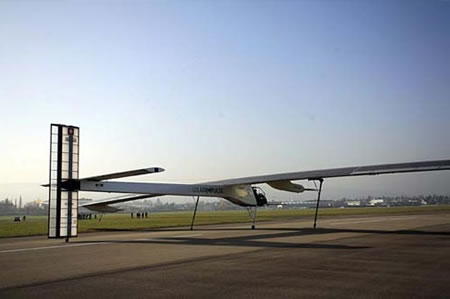 You may have heard of the Solar Impulse before. This sun-powered breakthrough in the world of aviation made its first full test flight, taking it closer to its goal of flying around the globe with energy from the sun. The Solar Impulse, weighing as much as a car and with a wingspan of a Boeing 747 took off from a Swiss airfield powered by its four electric motors that are juiced by solar cells on the planes wings.

A bigger production model that the designers hope to develop soon, will circumnavigate the globe. Flea-hop tests on the plane have been conducted since December, and the plane had never seen the sky above 2 feet and 300 meters in distance. The two pilots, project leader Bertrand Piccard and co-founder Andre Borschberg will take off on their round-the-globe voyage in the Solar Impulse in 2012.
[BBC]