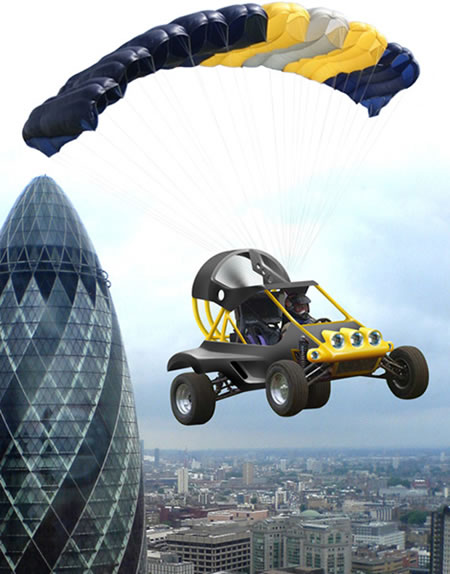 They say that the Parajet Skycar will be the world’s first carbon neutral flying car. But what piques my interest is that a Skycar Expedition team plans to fly/drive/whatever the vehicle from London to Timbouctou in 2009. Using a combination of flight and driving to combat the Saharan terrain will cover the 3000 miles journey. A cross between a dune buggy and a paraglide, the Parajet Skycar is a unique vehicle. A biodiesel-modified Yamaha R1 1000cc motorcycle engine powers it. The motor runs through a Continuously Variable Transmission either to power the rear wheels or to turn a large rear-facing propeller via a belt drive. In the Fly Mode, it takes off from a field or airstrip in less than 200 meters. In this mode the latest ram-air wing suspends it. Since the vehicle has no pitch control it will not stall or dive. It has a take-off speed of 60 kmph, a top speed of 110 kmph and a range of 300 km. Cruising altitude will be 2000 to 3000 ft with a maximum altitude of 15,000 ft. In the event of engine failure, the pilot simply glides to the nearest field or strip of land. The car carries a passenger and a pilot.

In the event of disastrous wing failure, car connection system failure or mid-air collision, an emergency ballistic reserve parachute can be deployed in the Parajet Skycar. The current model sports a steel framed chassis, but subsequent models will be made from aluminum which will be lighter and thus increase range, performance and luggage capacity. It has independent 4-wheel suspension and rear wheel drive.
In the road mode the car can accelerate 0-100 kmph in 4.5 seconds, have a top speed of 180 kmph and a range of 400 km. In fly mode the Parajet Skycar will have Conversion from “road mode” to “fly mode” and visa-versa will take just three minutes. The prototype is slated to cost only £35,000 or $70,000.
Source