The Ocean Empire LSV super yacht is powered by the sun, wind and waves 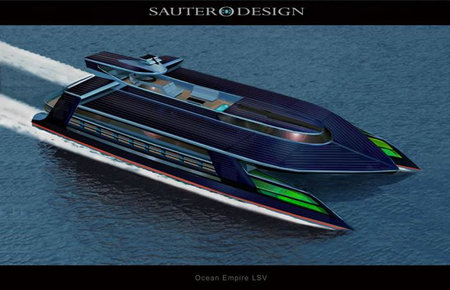 Yet another green machine to sail the seas, the Ocean Empire LSV (Life Support Vessel) is as green as any floating contraption can get. This one powers up using juice from the sun, using solar cells that cover up its entire surface and illuminating two Hydroponic farms at the same time. And the sun isn’t the only renewable source of energy powering up the Ocean Empire. It uses the wind too! The wind energy is used to power up an auxiliary automated SkySail that drives the Ocean Empire to 18+knots while charging her GM ESS2 batteries through power sailing KER. And that’s not all. The Ocean Empire uses energy from Waves too, using the Motion Damping Regeneration system and features every super yacht luxury you could find or possibly think of with minimal carbon footprints.

A yacht to boast about, both, for its luxury and ever green features, the Ocean Empire LSV sure is a great way to sail!
Via – [Luxurylaunches]