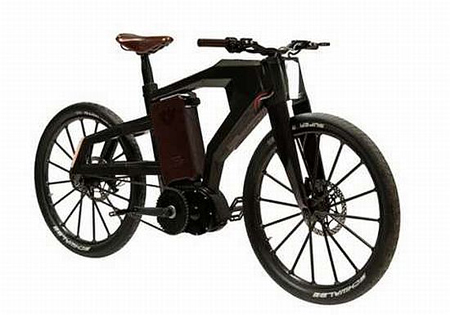 Who said electric bikes are slow? There’s certainly no as-low-as-a-turtle talk going on about this mean machine. Designed and developed by German bicycle manufacturer PG Bikes, the Blacktrail leaves a green trail behind, opting out carbon emissions and choosing an electric soul instead. Speaking about a quick set of two wheels with an electric engine, we’ve seen the Brammo Empulse before, accelerating to a sweet 100mph. the skeletal Blacktrail can go up to 100kph for about for 200km. and if that hasn’t left your jaw dropped already, it does this with just a 150 minute charge. Cool enough? We thought so!

The bike uses a CM 48V lithium-ion battery pack, using a body made of space age materials like carbon, magnesium and titanium, making it just as light, weighing in at around 19.8kg. The only bad part is its astonishingly long price tag, $77,000, owing to the fact that this is a limited edition vehicle.
[thedesignblog]