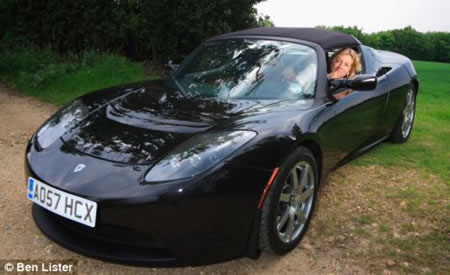 Until now the electric cars presented to u have been rather crude in design, both in looks and functionality. So only the Toyota Prius has made it to the popularity list that too not as a fully electric, rather as a hybrid which is powered by the petrol engine for the vast majority of normal driving, with an electric motor kicking in at low speeds or to provide extra power for acceleration. Two Silicon Valley entrepreneurs, who struck up a deal with internet tycoon Elon Musk – founder of the internet payment system PayPal – to design and produce the world’s first ‘green’ sports car. We are guessing they even contributed their cash via PayPal for goodwill. Their first production model, the Tesla Roadster, is based on the design of the Lotus Elise, and is assembled at the Lotus production line in Norwich, using parts from all over the world. But what make the car so special are the lithium-ion batteries that power it. These batteries are essentially a giant version of the sort you can find in your mobile phone have never been used in electric vehicles before, and are what give the Tesla its astonishingly zippy performance.

What’s more, they give it a far greater driving range than most electric vehicles (up to 220 miles, say its makers) and a far shorter recharging time – under three hours. Not only that, but the batteries have a lifespan of 100,000 miles, and their components are able to be recycled or reconditioned, meaning that they have far less of an environmental impact, too. In the U.S., the Tesla is retailing for $100,000, yep! I know you’re thinking that it would be cheaper to buy a brand new Porsche, but think about it. Buying a Porsche doesn’t stop your fuel expenses every 300 miles but a Telsa kills it down to ignorable amount of a few cents per mile every 200miles. The result is a super-cool sports car that will appeal to car-mad blokes and eco-conscious superstars alike.
Source