Tang is a wind powered yacht that requires no raised sails 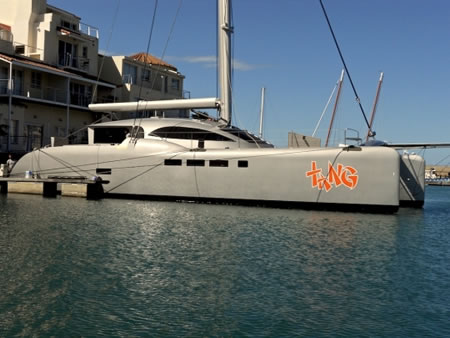 Now to power up a yacht by wind, its sails need to be up and ready to catch the breeze. Here’s a yacht that powers up with wind energy, even with its sails folded down! Built by International Battery and Electric Marine Propulsion, the yacht christened the Tang is basically a hybrid-catamaran, 60 foot long and packed with twin E motion 18-kilowatt permanent-magnet motors. To power these twins up, the yacht nestles a 144-volt lithium ion battery pack that charge onboard using the wind. The spinning propellers of the Tang turn the 18-kilowatt propulsion motors that generate electricity, which is then sent back to the battery pack. To be on the safer side, the Tang is also equipped with two 22-kilowatt diesel generators.

This one has all the luxuries to keep you smiling, including a 37-inch flat-screen TV, LED lighting, two refrigerator-freezers, a dishwasher, a microwave, an air-conditioner, and a water maker too! So raise those sails, or rather drop them, and Bon Voyage!
[Cnet]