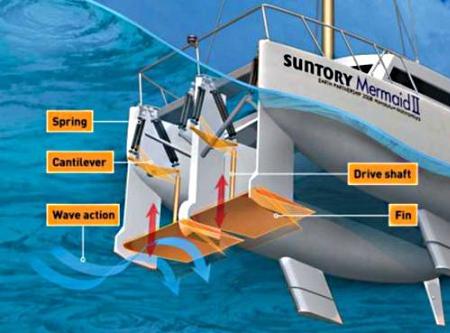 If speed is not all that you seek especially on blue waters, then take a look at the world’s first wave powered boat for a green sail. Dubbed, Suntory Mermaid II, this high tech boat utilizes the wave power to move over the same, waves, with ease. It also soaks solar energy to juice up all the on-board equipment. Touted to be the most advanced eco-friendly boat, Suntory Mermaid II, was developed by Hiroshi Terao of Tokai University. It works like this – wave energy is used to create propulsive power so that two fins underneath start moving to set the ship sailing. Shaped out of thin recycled aluminum, the boat can sail with an onboard engine too, if needed, but the whole idea to design such an eco-friendly boat is to adhere to green sailing. The Suntory Mermaid II is going to embark on a green voyage later this month.
Via Newlaunches