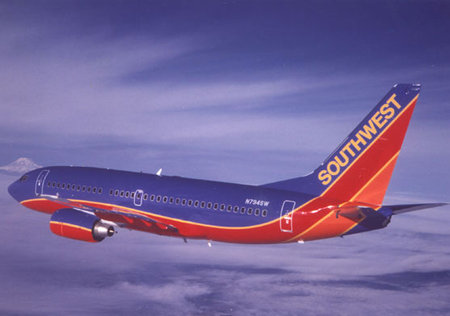 The blue skies are turning green as more and more airlines are becoming environmentally responsible. Following the green footsteps of Avantiar, the Southwest Airlines is also making noise about its “Green Plane”. Their prototype Boeing 737-700 promises to save more than 10 U.S. million dollars a year in fuel costs and reduce emissions. Moreover, the airline has also focused on eco-interiors with 100 percent recyclable, yet replaceable, carpet and lighter leather seats. Overall emphasis is on reducing the weight of the aircraft. They also intend to initiate an onboard recycling program that would allow the airline to capture more recyclable material and divert it from the waste stream. Speaking in real figures, the new eco-materials on the Green Plane will help to save about five pounds per seat which amounts to about 472 pounds per plane. This in turn is equated to 9,500 gallons of fuel per year per jet. And if you calculate it in hard cash, about 19,000 dollars per aircraft per year can be saved. Bottom line is that the company’s annual savings could amount up to 10.3 million dollars which will also benefit our environment.
[Fastcompany]