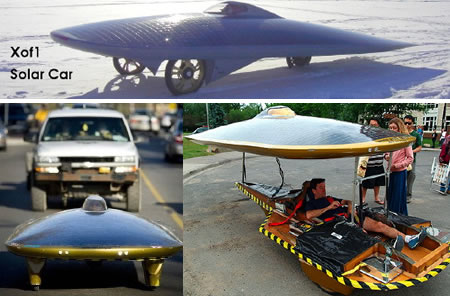 Just a few days back we mentioned about the Solartaxi that is on its way around the world to set a record. Though Palmer is still driving towards his mission, Marcelo da Luz has realized his green dream by setting the world record for distance traveled in a sun-powered car. Breaking the current record of 15,070 kilometers (9364 miles), from Buffalo to Halifax to Inuvik to Victoria, on Canada’s Pacific coast, da Luz traveled for three months. It is also estimated that this is the first solar car to operate at below-freezing temperatures.

Commencing from Toronto, Ontario Canada, he moved through New York State, Ohio, Indiana, Illinois, Wisconsin, Montana, Manitoba Canada, Saskatchewan Canada, Alberta, Yukon Canada past the Arctic Circle to Inuvik NorthWest Territory, Yukon and Alaska. Wow, this is certainly a far-reaching green drive! Though his solar powered vehicle, Xof1, moved about US and Canada, it was registered in Barbados, to skip a few non-favoring legal laws.
Shaped like a UFO flying saucer, this solar powered car is all geared up to embark on a second leg, which could take him as far as Argentina. This Air Canada flight attendant was inspired at the young age of 19 when he saw footage of the World Solar Challenge race in Australia then. However the road to realize his dream hasn’t been smooth as Marcelo da Luz has mortgaged his house, exhausted his savings, split with his love-lady and is now set to part ways with this Honda civic too.
Though his sole hope was to set a record, along the way he has also educated thousands by lecturing at numerous schools, answering to hundreds of queries and inspired thousands with his single-minded determination.
Source [1] & [2]