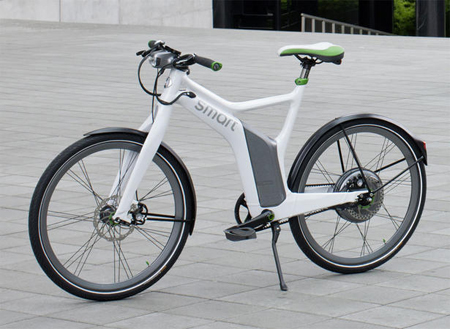 Smart has proved its green before, with its concept ForSpeED design. The automaker, also known to previously have launched electric scooters, will launch its first electrically assisted bicycle, unveiled at the Paris Auto Show a year ago. To be kept on display at the Eurobike show in Friedrichshafen (31 August – 3 September 2011) and at the Frankfurt Motor Show (13 – 25 September 2011), the ebike will ride into European and North American markets by 2012. Using both, pedal power and an electric assist to drive this one forward, the Smart eBike comes with a 400Wh lithium-ion battery, a USB interface and Magura MT4 disc brakes!

A seemingly better alternative than driving a gas-guzzler around the neighborhood, Smart seems to have got it just right with this one.
[zercustoms]