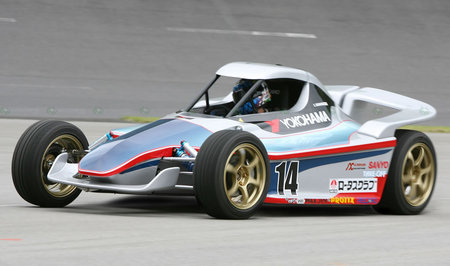 The Yokohama Electric Vehicle has something new nestled in its belly this Pikes Peak race and is all set to zip around the racetrack. We’ve seen electric cars race before, showing of their efficiency and awesomeness. Well, this is one of the most difficult races around, for the cars, the drivers and the companies backing them. Now don’t go picturing a Speed Racer type death track. The Pikes Peak International Hill Climb is basically a climbing race, wherein, the participating cars have to run up 20kms of roads.

Yokohama’s race war will use Sanyo batteries this year though. The company recently announced that their batteries will power up the car for the 2010 run. The race has had Japanese Tajima-San and its SX4 in the lead since the last 4 years. Will the Sanyo batteries help the Yokohama EV perform any better? Let’s wait and watch!
[Akihabaranews]