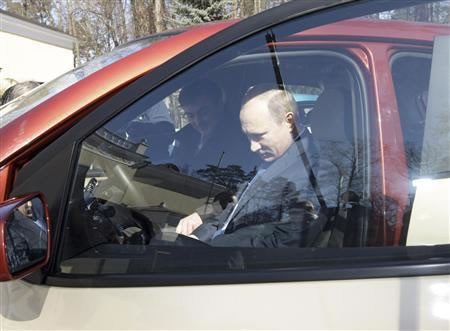 A short while ago, we had brought you tidings of billionaire Mikhail Prokhorov’s green dream on wheels, the ë-mobile personal hybrid car project. The first ever gasoline-electric hybrid to roll out from Russia, this car now had the honour of being driven around by His Excellency, Vladimir Putin the Prime Minister of Russia on his trip to visit his political partner President Dmitry Medvedev. The car served well on the 5 kilometre long journey with its rotary engine and ultra-capacitors that replace the traditional lithium-ion batteries. The car juices up with both, electricity as well as petrol. This true-blooded Russian will hit assembly lines by the second half of 2012, and Prokhorov sure doesn’t follow the Mayan calendar. Expecting a 10,000 cars a year production, this one should come with a price tag of about $15,860.

Now that sure is a hefty price that we sure wouldn’t mind paying for a car that does a 100km on just 3.5 litres of fuel! A shot of vodka for this fuel-efficient Russian!
[Reuters]