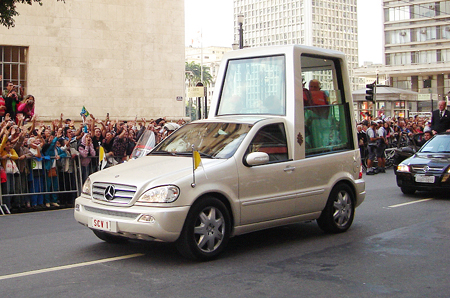 The Pope-mobile goes green, and His Holiness, Pope Benedict XVI will ride green in future. According to Cardinal Giovanni Lajolo, who runs the Vatican City State, the Pope prefers a greener vehicle, electric, instead of a gas-guzzling one that’s been used since times immortal. Vatican itself has taken a green route with the installation of photovoltaic panels, way back in 2008 on the roof of the main auditorium. In 2009, the main cafeteria was given a solar powered cooling unit. SolarWorld, the firm that installed the solar panels, are busy with ideas for an electric Pope-mobile that can accelerate from 0-100 kph in three seconds, for security reasons.

One thing’s for sure, Pope Benedict XVI sure loves the environment just as much as we do, and will ride green in future.
[huffingtonpost]