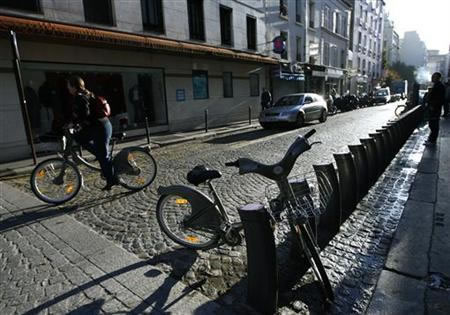 While Paris is busy flaunting its shiny new bike sharing program, the city will now play home to an electric-car self-service hire scheme too! Bollore has won the contract and will now provide the little four-seater electric cars for this program. Designed by Italian partner Pininfarina, the bubble shaped Bluecars have a range of 250 km (155 miles) and takes around four hours to charge. The bike sharing program launched in the city, Velib, has grown, after facing a bunch of problems, and the new car hire program, the Autolib, seeks to have at least 3,000 electric vehicles on Paris streets, ready to be hired from any one of the 1,000 stations in and around Paris and its suburbs.

For an annual subscription of 12 euros ($15.87) per month and 5 euros for the first half hour, four euros for the next and six for the following half-hours, this scheme is sure to catch on among Parisians too.
[Reuters]