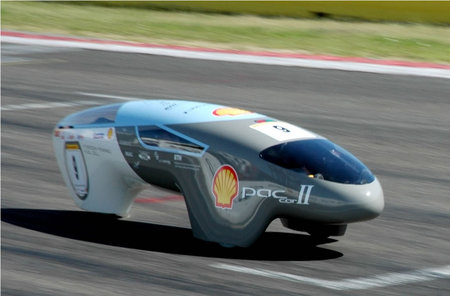 Pac Car II was invented from the project of Switzerland students to develop the world’s most economic car. This car is a Guinness Book Record holder, is 10 kg heavy, having on-board electronics with fiber-optical communications and tank to wheel efficiency. The record held by the car is for the distance travelled. It covered 5,385 kilometers with hydrogen equivalent of 1 liter of gasoline! Now that is super-efficiency in terms of fuel consumption!

As the clean car attracts attention throughout the world, with President Obama upholding “Green New Deal”, the World’s largest fuel cell expo, FC EXPO 2009 will be held in Tokyo Big Sight, Japan from Feb. 25 (Wed) to 27 (Fri) 2009.Various environmentally friendly cars will be present from throughout the world, such as Toyota, Honda, General Motors, and Mercedes-Benz. For FC cars, such as Toyota, Mercedes-Benz, and Nissan, Test-Drive Event will be held where one can actually test the ride quality. Guinness Book Record Holder “Pac Car II will come from Switzerland, making this the Japan Debut.
[Pvexpo]