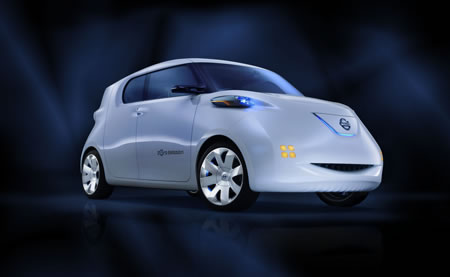 Nissan pulled the veil of its concept electric car, the Townpod at the Paris Motor Show. At first sight, we couldn’t figure out what it was supposed to look like, or what it tried to. The designing sure made us cringe away. But then, beauty is just skin deep! The Townpod uses technology very similar to Nissan’s Leaf. To charge this one up, you plug into to a socket at the car’s nose. The cockpit isn’t too much of a jet-plane type and is simple to understand, with a futuristic touch. With a long sliding rear seat and rear hinged doors and split trunk doors for easier access, the car can be used efficiently to carry passengers as well as luggage

A concept for now, Nissan might just put a version of the Townpod on roads in future. Hopefully, they give it a little facelift!
[EarthTechling]