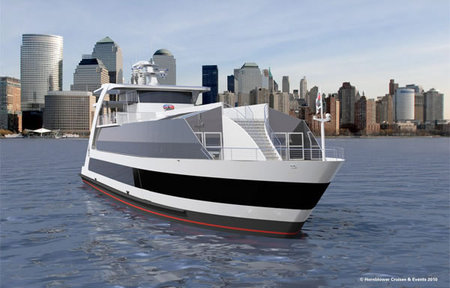 Soon, the ferry you hop on for a ride through the waves to the Statue of Liberty and the Ellis Island could be a green and eco-friendly one. One of the world’s first to depend on hydrogen, solar energy and wind energy to power up, this ferry called the New York Hornblower hybrid is currently being chiseled into being at Bridgeport, Connecticut. With enough space to ferry around 600 passengers, the boat will use Tier 2 diesel engines, hydrogen fuel cells, solar panels and wind turbines to power up. Also, the diesel engines are claimed as support power systems that’ll be used only when the renewable energy is drained dry.

With this, ferrying away to the Statue of Liberty could soon turn into a greener affair, without polluting ferries smudging the waters with carbon footprints.
[Engadget]