Microsoft and Toyota to develop smart grid technology together 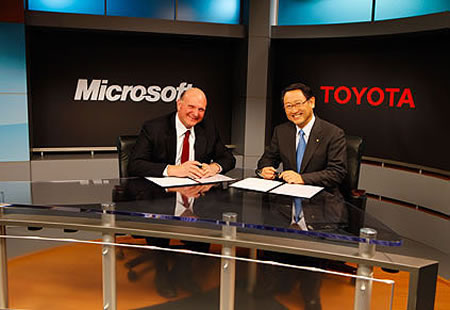 Electricity grids are destined to get smarter with technological developments and the rise of renewable energy today. We’ve seen efforts being put into the act of turning electricity grids smarter by tech firms like Mitsubishi Electric and General Electric. Now, Toyota has joined hands with Bill Gate’s baby, Microsoft, and will develop telematic services and deploy the same, based on the cloud-based Azure technology developed by Microsoft. Toyota Motor has been day dreaming of a smart grid that hooks on to vehicles, allowing users to switch on the heaters and air conditioners in their homes while seated in their cars, turning vehicles into information terminals of sorts. That’s not all. Developing a system as such will also help hybrid and electric Toyota car users to plug into the grid at just the right time, when consumption is low and prices drop.

A dream shared by Toyota and Microsoft that we’d like to see come true, smart grids could change could change the way we switch on our bedroom lamps too! The very thought of having our dinner automatically heat up in our microwaves while we drive home makes us await the smart grid!
[Cnet]