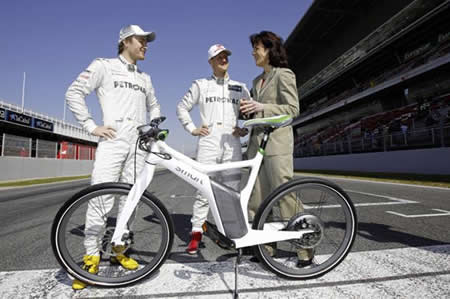 Mercedes AMG Petronas Formula 1 drivers Michael Schumacher and Nico Rosberg might sure
spend a lot of their time driving seriously inefficient though extremely fast cars. That doesn’t
stop them from travelling green at times however. The two celebrated drivers are now the owners
of the first Smart eBikes. To be launched officially in April 2012, the drivers were handed
over their green-as-a-leaf rides at the Circuit de Catalunya near Barcelona. The Smart eBike
is probably one of the sexiest bicycles you’d come across in present day, and Schumacher and
Rosberg simply couldn’t stop grinning on receiving theirs. To be made available in crystal white
with electric green trims and matt dark grey with flame orange accent trims, the Smart eBike will
be available for a pocket burning €2849 (approximately 3,766).
[Via EMercedesBenz]