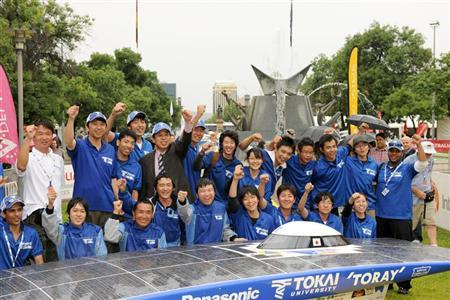 Proving to the world just how transport-friendly solar-powered vehicles can get, a Japanese team from Tokai University, near Tokyo recently won the World Solar Car Race from the northern city of Darwin to the southern city of Adelaide. The race stretched across 3,000 kilometers through bushfire, wallabies, cattle, sheep and lizards and some seriously strong herculean winds. Following the Tokyo team was the Nuon Solar Car Team hailing from Netherlands while a team from the University of Michigan finished third. The race had 37 cars hailing from 21 different countries around the globe speeding towards the checkered flag, all powered by electricity.
[Reuters]