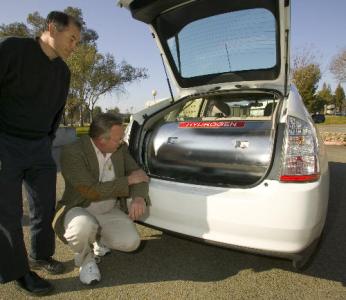 As the fuel prices are expected to escalate to dizzying heights, the options to find a reliable alternative are the primary concern for scientists and researchers. It’s not everyday such breakthroughs are achieved in which a team manages to keep a hydrogen vehicle powered for six days without needing any refueling. The Lawrence Livermore National Laboratory researchers have successfully achieved a world record for the maximum distance travelled by a hydrogen powered car. Until now the fleet of hydrogen-electric Toyota Prius’s sold in the market and used by some city governments, run on compressed hydrogen gas, and have a limited range of around 80 miles between refuels. Even a pretty un-ambitious three-gallon tank fills the entire trunk of a Prius, yet still only enables a range of approximately 200 miles, which does not qualify as a gasoline competitor. By using liquid hydrogen, this takes up around a third of the volume of compressed gas.

However, it is much more problematic to handle, mainly due to the fact it must be kept at extremely low temperatures (around -420oF) and very high pressure to stop it from evaporating as the engine gets hotter. The tank can also hold cheaper compressed hydrogen, allowing users to use it for shorter drives with the option of switching to liquid to triple their range for longer journeys. It can also withstand crashes and fires without exploding. The team apparently even shot one tank with a gun without blowing it up. Only further testing can really tell us if this truly is the future for economical transport.
Source