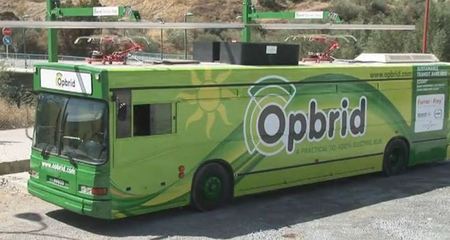 We’ve had quite a few green buses roll by before, showing off their eco-friendly and energy-efficient insides. To join the ranks of buses like those, North Swedish cite, Umea, recently unveiled a hybrid bus with a unique charging system. Inspired by trams to some extent, the bus uses a roof-top pantograph that hook on to Opbrid’s Busbaar overhead charging stations for a rapid charge that takes about five to six minutes. Called the Arctic Whisper, the bus can then operate for up to 18 hours on a single charge, before the diesel engine kicks in. Also, during the night time when parked, the bus plugs in to juice up its battery pack to the brim.

A great way to add some green to mass-transit systems, this bus sure beats driving around in a gas-guzzling car all day. Hopefully, the people of Umea leave their cars home and take the bus instead!
[Autobloggreen]