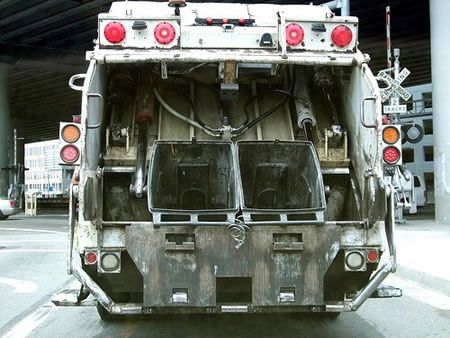 Ever noticed those big trucks that pick up your bins, tip in the contents and carry it all to a landfill or a recycling plant? Smelt the smoke and smelly fumes they leave behind? Well, they’re out to stink, not just because of the garbage they carry, but the carbon emitting fuels they use. So heavy duty vehicle manufacturers, Peterbilt and Eaton Corporation have joined hands together work on energy saving and fuel saving garbage trucks. The sparkling new Model 320 Hybrid, a garbage truck by Peterbilt has recently been announced, uses Eaton’s new hydraulic hybrid system and pulls off 30% in fuel conservation. That’s not all. The trucks spew out less of a mess and lesser emissions with reduced maintenance costs too. Four of these will first hit the road in Anne Arbor, Michigan, and do the clean and green garbage collecting rounds.

The trucks use a system called Hydraulic Launch Assist that captures up to 75% of the kinetic energy that normally lost through braking. Taken that garbage trucks stop a lot, this seems just ideal. The smelly old garbage truck finally meets its end.
[CleanTechnica]