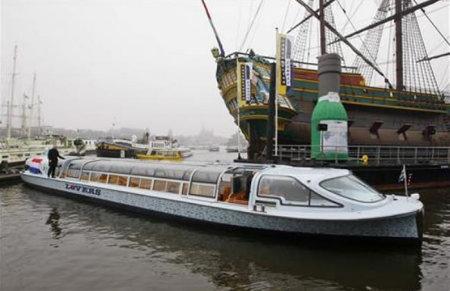 The city of Amsterdam has around 125 canal trips everyday with diesel boats making the rounds. This obviously pollutes the water with emissions, grease and other pollutants. So, to make these canal trips cleaner, the ‘Nemo H2’ fuel cell powered boat made its first sail on Wednesday. This boat can carry around 87 people and is unique in its design to run specifically on a fuel cell powered engine. Hydrogen and oxygen are mixed to create electricity and the only byproduct of this whole procedure is water. Boat trips are a popular attraction in Amsterdam. Visitors will be able to cruise the canal with the ‘CO2 Zero Canal Cruise’ this spring for an extra 50 (euro) cents which will be used to fund carbon reducing technological research. The new fuel cell powered boats costs twice as much a diesel powered canal boat. It has to make a pit stop at a hydrogen dispensing station to refill once a day, unlike normal boats that need to be refueled only once a week.

But according to researchers, with more hydrogen distribution and purchases of more boats, running costs will decline. A cleaner ride on Amsterdam’s age-old canals is now just around the corner!
[Yahoo]