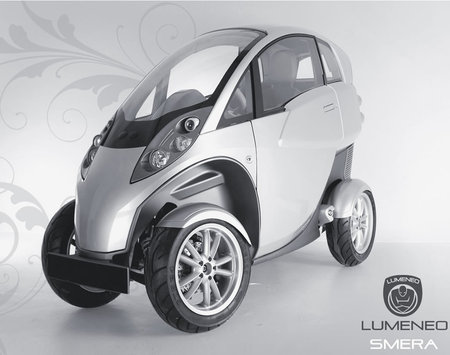 Lomeneo Smera is a French electric car that was first introduced at the Geneva Motor Show in 2008. The car, which is a bit like a modified rickshaw (Indian three wheeler public vehicle) especially with its tilted effect, will make an appearance at the 15th Sport & Collection Weekend near Poitiers, France. The car can apparently go from 0-60 in eight seconds, has a top speed of 80 mph and has a range of about 90 miles from a 144 volt lithium ion battery.

In case you want to buy this spooky looking tiny piece of motor, you can get it in Paris for 24,500 euros which is about $33,000. By 2010 they will roll out more cars across various cities in Europe. One – it is recession so if you are going to buy a car, why would you buy something where only your nail can fit? Two – I understand the theory of going green for the sake of humanity, but seriously, what is this?