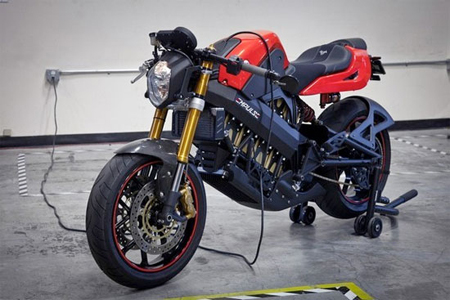 Whoever said an electric engine propped up on a pair of wheels can’t get you around as quickly as a gasoline guzzling bike? Here’s an electric motorcycle that proves all those I-doubt-electric-vehicles-type cynics wrong, the Brammo Empulse. Well, besides just looking like a mean-ma chine right out of a comic book, this one pretty much behaves like a vehicle a black-clad vigilante would chose to ride. Weighing around 390 pounds, this hunched back naked bike weighs a lot lighter than regular sports bikes. With 55 horsepower engine with 59 pound-foots of torque, this one can go up to a sweet 100mph, enough to make your hair stand on end, without receiving a shock from its electric engine.

The Empulse offers riders an opportunity to reach some pretty quick speeds with loads of power and without spewing out carbon into the atmosphere. A true green and clean racer, the Brammo Empulse is here to stay.
[dvice]