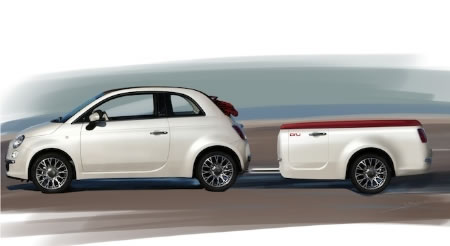 So you’ve planned to set out on a long journey down an empty desert road in an electric car. This sure sounds suicidal to most of us. Well, doing so might just be a lot easier and not so much of a suicide fantasy, if you’ve got a trailer packed with lithiums hooked behind your ride. Indiana-based Electric Motors and Vehicles Company (EMAV) have come up with this trailer complete with lithium-ion batteries and a four-cylinder, 750-cc diesel generator that will keep your electric on the road for a longer stretch of miles. The Power Regeneration Unit will show up in 2011. Now you probably might have felt the urge to comment and say “Hey! Won’t having to tow that thing along drink up more juice!”

The designers of this one have though of that too, by having the trailer self-propelled. Hooking on to the car merely guides it around, without the need to actually pull it. With a six gallon diesel tank, this one could extend your EV’s range by a whopping 700 miles! The trailer is steeply priced though, around $15,000, for which you could probably buy another car.
[Earthtechling]