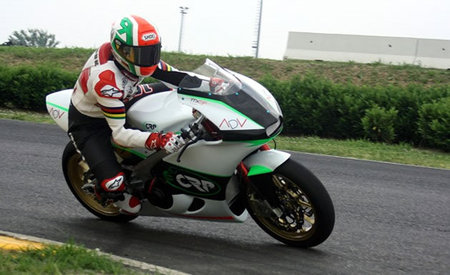 Nothing gets better than an electric motor on a set of two wheels zipping around on a racetrack. That’s exactly what Italians CRP Racing thought of too while chiseling out this bike. Known as the eCRP 1.0, this electric bike first showed itself to the world at its launch in January. The company has now released an advanced version, the eCRP1.2, an evolution that has made its predecessors seem somewhat stone-age. The 1.2 boasts a larger 7.4 kWh battery and Marzocchi “upside down” forks up front and in the rear. The switch off button has been shifted to the underside of the bike, which uses twin Agni 95 DC motors to spin the rear wheel.

The changes have pushed the speed needle a bit further too, with a newly attainable top speed of 200kmph, around 124.3mph. The bike made its maiden journey at Castelletto circuit in Northern Italy in the hands of Roberto Locatelli. You can have one of these for $49,460 or lease one for the season at $22,280. For $6,189, you can have one for a single race too!
[Autoblog]