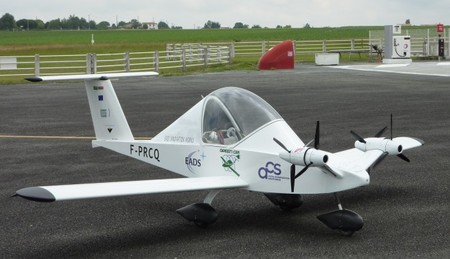 We’ve seen a few electric planes before, trying to have a cleaner hand at the aviation industry, including the Waiex E-Flight Electric-Powered plane and NASA’s Puffin. Well, here’s yet another little sky flier with a bit of a twist though. Four electric engines! The brainchild of Airbus parent company EADS, the four engine plane was unveiled at the Green Aviation Show in Paris. Though nothing like the huge Airbus models we come across, this one uses electricity and can seat just one. This is the first electric powered, fully aerobatic four engine airplane to take to the skies and is sure to have its share of notice.

The plane is based on the twin engine Cri-Cri airplane and is capable of aerobatic maneuvers with a flight time of up to 30 minutes. With a wingspan below 13 feet, this electric Cri-Cri features four brushless electric motors, using counter rotating propellers and lithium batteries. An electric way to take to the skies is here; hopefully a larger version Airbus adopts its green ways too.
[Wired]