Coffee-powered car sets land-speed record, not so much of an eco-friendly ride though 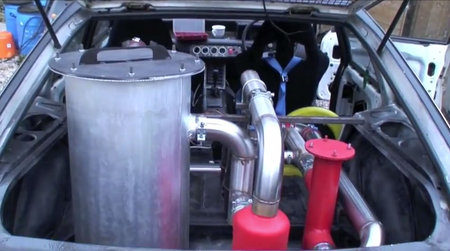 Alternative fuels are an answer to a greener tomorrow, that’s if these fuels really are that efficient and easy on the pocket. In what seems to be a complete waste of caffeine, the Teesdale Conservation Volunteers of Durham, England, developed the Coffee Car. Basically a caffeine-obsessed set of wheels that uses coffee to power up instead of gasoline, the car touched 66.5mph setting a Guinness World Record. Using a fuel called Syngas made up of carbon monoxide, hydrogen, carbon dioxide, and methane created by introducing steam to coffee beans with temperatures at 700C (1292F), the car seems to be a nasty waste of steaming brew to us.

And then again, pouring your hot cuppa in your fuel tank isn’t all that much of an economic option after all. Not a lot of us would prefer shelling out solid cash to refuel at a Starbucks anyways!
[ExtremeTech] And [Gizmodo]