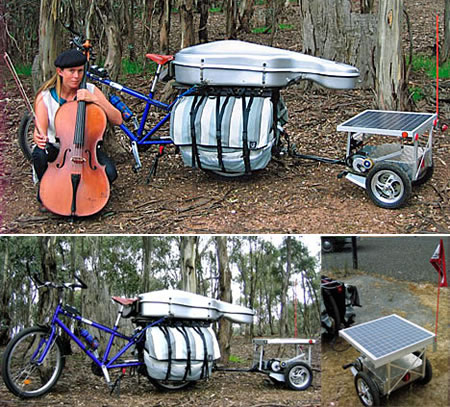 Kristen Rule will soon be spreading her music around, on a pair of wheels and with a little help from the sun. The last time The Unconventional Cellist hit the road was on a 20 week music tour, when she hopped on a motorcycle with a solar trailer, all ready to play with her cello. This time though, with the release of her new album, this cellist will use a bicycle instead on tour. The bicycle will be powered by a solar powered electric assist trailer. The Mechanarchy Watt-Bot trailer packs a 30 watt solar photovoltaic panel along with two 12 volt batteries. The power generated by this system can help assist the bike and its rider for up to three long hours.

That’s not all. The trailer frame of this one along with the bicycle tow hitch uses recycled materials and can also help power up an outdoor gig where power isn’t easily accessible. The Yuba Mundo bicycle also has enough capacity to load on clothes, camping gear, microphones, a little stage and a mixer. We wish Kristen Rule a musical solar powered journey.
[Treehugger]