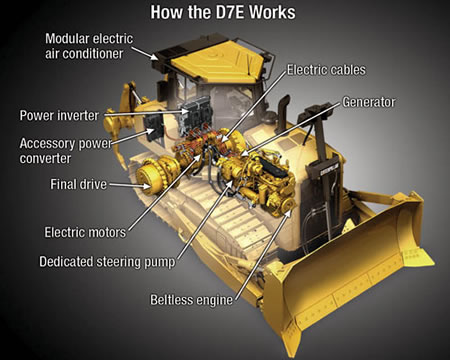 Caterpillar was always a winner when it came to making big headlines and having a huge fan base. Now with the green whistle shooting from every industry, they are not staying behind either. In 2010, they will be selling the D7E, a diesel-electric bulldozer that is touted to be the world’s first hybrid bulldozer. The bulldozer apparently gives better power than its predecessors and the company is also saying that since it is going to be electric, it will be a blessing in terms of fuel saving. The cost of this equipment will be 20 per cent more than a standard D7R. The machine will be able to stand much tougher situations with its 9.3 liter diesel engine. Also, it seems the company hasn’t done this as means to join the bandwagon, but it has been developing this particular technology since the late 1990s. But the timing is just perfect now and with the ability to save up to 24 liters of fuel over an 8 hour period; this definitely looks like a winner.
[Gas2]