Cal Poly – The three-wheeled car with the best fuel economy 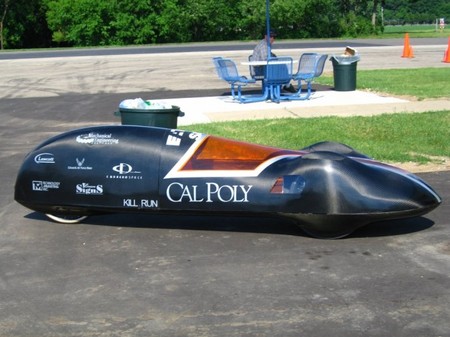 Now here’s a stiff and rocket shaped competitor for the Chevrolet Volt, the car that proudly claimed to deliver 230mpg. If all goes well, this car designed by mechanical engineering students at California Polytechnic State University, will burn up the tarmac, without using batteries. This contraption was built by the Cal Poly Supermileage Team, and on three wheels, will deliver 13 times more than the 230mpg Volt and will boast of the best fuel economy. The team is currently working on two cars, the Black Widow which won the 2007 Eco-Marathon and another car that will be used for the competitions Urban Concept category.

Since its creation in 2005, the Black Widow has evolved with its fuel economy being raised from 861 mpg to the current 2752.3 mpg. The car weighs just 96 pounds and has a drag coefficient of 0.12. It can reach a cool 30mph with a modified 3 horsepower Honda 50cc four-stroke engine.
Let’s wait and watch the Black Widow at the competition to be held from March 26th to 28th.
[Wired]