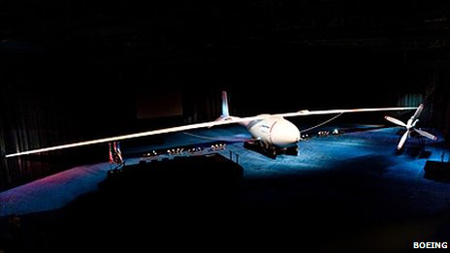 Solar powered planes… Old news… Hydrogen powered airplanes… Now that’s something new! Boeing, the father of the skies today, is all set to churn out a new alternative-energy run planes for the future. In its infant stages currently, the firm is developing a hydrogen powered plane that will test run in 2011. Termed the Phantom Eye, this one scrapes the heavens above, flying at 20,000m (65,000ft). A demo version of the model will be sent to NASA’s Dryden Flight Research Center in California in preparation for its maiden run in 2011.

Being lighter and more powerful owing to the hydrogen fuel system, this airplane is capable of long endurance flights. The Condor’s 60 hours of flying seem barely enough compared to the Phantom Eye’s 96 hour flying capability. And its powered by hydrogen-fuel, the cleanest way to power up any vehicle today, on ground or up in the skies.
[bbc]