Blackbird – The car that travels faster than the wind, and powered by wind itself 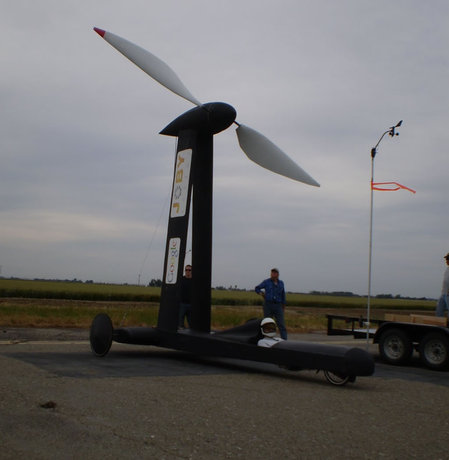 Solar power has had its share of attention. Its time for wind energy to make heads turn now, and by that, we mean heads turning in shock and amazement, as this wind powered car zips by. Now you need to catch sight of it first, watching it may be a blurry experience, taken that this vehicle travels faster than the wind itself. That’s if the wind travels that fast. The car, in a recent Californian run reached top speeds of 2.85 times faster than the wind, which at the time was blowing at 13.5mph. The car, designed by Thin Air Designs, known as the Blackbird, was built by an aerodynamicist, paraglider and kitesurfer, Rick Cavallaro, with enough knowledge of the way winds blow, to come up with this.

After a little brain-straining, he came up with the Blackbird, to travel faster than the wind, using the wind. The car, made mostly of foam, resembles an F1 car, with a propeller stuck up behind. The five meter high propeller pushes the air behind and the car forward. How quick will this one be in a cyclone? We can only guess.
[Physorg]