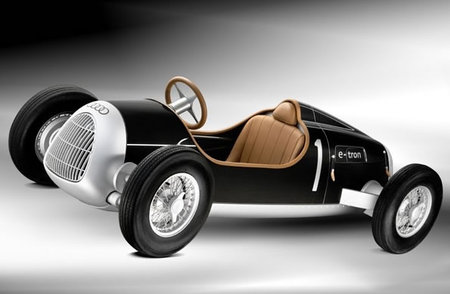 With a little touch of the past, a load of the present and some from the future, Audi has come up with yet another little vehicle that’s sure to bring a smile on the faces of car lovers and environmentalists alike. The car’s named the Auto Union Type C e-tron and will show up at the International Toy Fair in Nuremberg in Germany. Now this one’s a lot more than just a toy. It can touch speeds of 18.64 miles per hour and is based on the Auto Union Silver Arrow Type C race car. Using a lithium-ion battery with a .5 hp rear-wheel drive electric motor that generates 29.5 pound-feet or torque (peak at 44.25), this one has a range of 15 miles. The car charges up in two hours, using a 230V European socket.

More than just a toy, the Auto Union Type C e-tron is sure to leave everyone impressed. It looks great, functions well, and comes with Audi blood running deep in its veins.
[Autoblog]