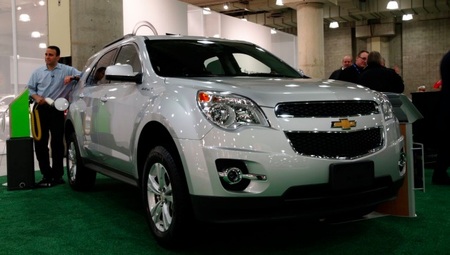 AMP, which has previously converted the Saturn Sky to an all-electric drivetrain, displayed their new production, an all-electric version of Chevy’s Equinox SUV at the New York Auto Show. Although it is an all-electric car, it does not lack in its fair share of power. AMP has used Remy’s HVH250TM motor for the drivetrain which, according to the President of AMP, are the best in the market. The AMP’d Equinox can cover a distance of 150 miles on a complete charge and can attain a top speed of 90mph. AMP claims that the car can accelerate from 0 to 60 in about 8 seconds. The AMP’d Equinox is supposed to be available in the market from summer this year at a price of $50,000 after deducting government incentives.

This eco-friendly high performance SUV still has some issues to be solved, but if other automakers take inspiration from such models, it can be of great help to reduce carbon emissions.
[autoblog]