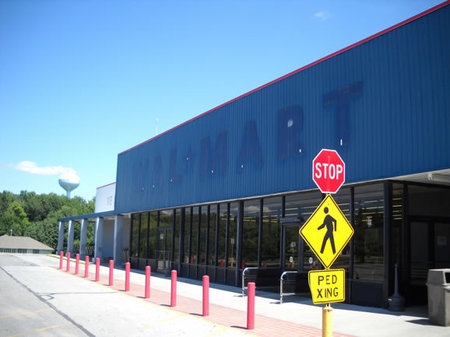 We’ve heard of Wal-Mart’s efforts to go green with solar panels before at Apple Valley. The retail giants have done it again, this time with recyclable stores! Now we aren’t talking about PET made stores or Wal-Marts mad from cardboard. Lee Scott, chairman of Wal-Mart’s executive committee stated at the Fortune’s Brainstorm Green conference, that the retailer was looking to have its buildings built from materials that can easily revert to earth once demolished. A spokesperson also stated that Wal-Mart, known for trampling over local businesses, is planning to use more recyclable materials for future builds.

Currently, the buildings use rubber in store baseboards that is made partly from old diapers, steel containing recycled components and concrete composed of 20% fly ash (a byproduct of burning coal). If these statements aren’t just rumors or dreamy imaginations of Lee Scott, Wal-Mart’s pros will soon outdo its cons.
[Good]