Steampunk version of R2-D2 made from recycled products 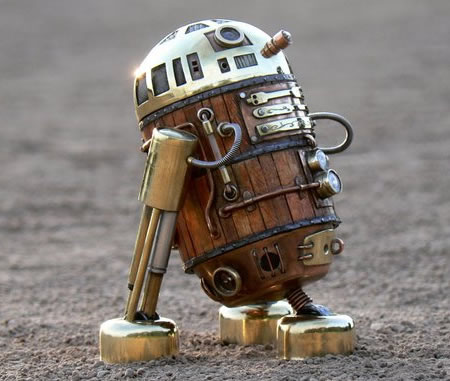 We all know that good old retro-futuristic Steampunk design, and we’ve seen a bunch of it in movies too, be it the Golden Compass or the Wild Wild West. Here’s a little robot that might just find itself in the next Steampunk flick we see, created after the R2-D2 from the Star Wars. Built by designer and artist AmoebaBoy based in UK, this one’s made out of a bunch of recycled stuff, including boiler planks made from wooden coffee stirrers from a burger joint and a dome chiseled out of the internal workings of a water meter. The dome in particular took a whole two days to shape up and beat out. And the best part is, it’s just like the R2-D2 we’ve been seeing all along, though with a “Steamboy visits the Star Wars” touch.

A great way to recycle and recreate indeed, we applaud AmoebaBoy for the effort put into this one.
[Inhabitat]