Johannesburg plays host to the Coke Man, a giant figure made from recycled Coca-Cola cases 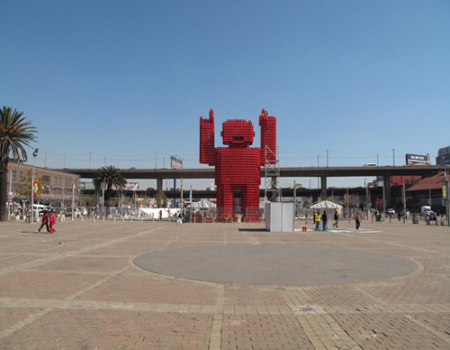 Is that an Optimus Prime? Is that an oversized Super Mario? Hell no! It’s Coke Man! Here’s something that could give all those colossal and gigantic Transformer figures made from recycled stuff a tough time. Coke Man. This giant figure, of a man crafted out of old recycled cases looks less intimidating than the Transformers too, and it’s lovable too. Located at a Coca-Cola facility in Newton Joburg (Johannesburg), this figure is indeed a work of art that is sure to leave your jaw-dropped. The statue seems happy to be here though, and we absolutely love it!

Around 2500 of recycled Coca-Cola cases were used to build this one. Standing 16.5 meters high, this one has helped in recycling 25 tons of material, all of which will be reused once Coke Man is knocked back to the ground, which shouldn’t happen too soon in the future. We’d love to have a Coke Woman too!
[Fubiz]