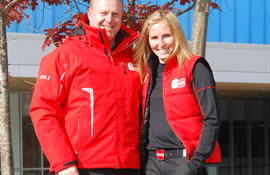 We know of plastic bottles being recycled to make a whole lot of amazing stuff. This time, they will be used to make uniforms for the Coca-Cola staff at this year’s Winter Olympics in Vancouver. Made out of 120 plastic bottles, these uniforms will help Coca-Cola go carbon neutral. The company has been a loyal sponsor for the games since 1928 and plans to go green for the upcoming games this year. This isn’t the first time Coke has made a green statement with recycling bottles. PET bottles have been used before to make the world’s biggest recycled artwork during the Recycle Week in Great Britain. The company also opened the world’s largest bottle-to-bottle recycling plant in South Carolina that will produce approximately 100 million pounds of food-grade recycled PET (polyethylene terephthalate) plastic for reuse each year.