Boat made of 16,000 plastic bottles to sail from San Francisco to Sydney 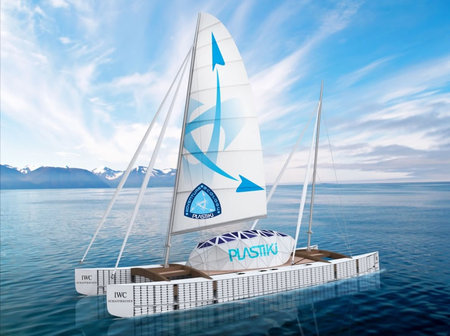 Being ambitious is a fine quality but that has to be complemented with being smart else the equation fails. At this moment David de Rothschild in the California is preparing to attempt a 11,000 mile journey in a plastic bottle boat. At this moment between 12,000 and 16,000 two liter soda bottles are being collected to fill in the twin hulls of their ‘Plastiki’ vessel. The name is supposed to be homage to fabled Norwegian explorer Thor Heyerdahl who sailed 4,300 miles across the Pacific on the Kon-Tiki, a raft made from balsa wood in 1947. ‘Each bottle will be pressurized using dry ice powder that will sublimate into carbon dioxide gas.’ If they get these done on time they will start their adventure in April from San Francisco to Sydney. At the end of the trip these bottles will be recycled.

The boat is also made to be 90 per cent recycle materials with only its masts being metal. Rothschild will be joined by three sailors, scientists and other crew members and the trip is estimated to take more than 100 days. Just so you know, this dude Rothschild is ‘the scion of a wealthy British banking family and is one of only several dozen people to traverse both the Arctic and Antarctic ice caps’. So for the sake of the attempt and the efforts, let’s hope they make it well.
[Gizmodo And Edition]