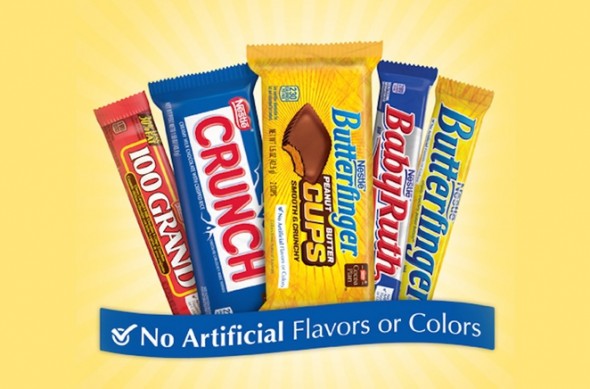 The Crunch and the Butterfinger candy bars are yummy to taste, but they are loaded with sugars and artificial colours. But now they will be healthier too as Nestlé USA has announced that it will remove artificial colors and flavours from its candies and chocolates by the end of 2015. Nestlé has been striving to remove artificial colours such as Red 40 and Yellow 5, and flavourings like vanillin from more than its 250 chocolate products. The artificial colourings will be replaced by natural ones like annatto which comes from the seed of achiote tree; the real vanilla will take the place of the artificial vanilla. The good news is that the flavour and the taste of your favourite candy will not get altered and remain the same. The natural ingredients will be costlier than the fake ones, but the price of the chocolate will not be increased.

According to Nestlé’s President of Confections and snacks, Nestlé is the first major U.S. candy manufacturer to make this commitment. Also, if any new candy or chocolate is launched, it will be made without any artificial colours or flavours. Nestlé’s top competitors in U.S, Mars and Hershey’s will also dump the artificial ingredients and opt for the natural ones. Let’s hope the positive trend is adopted by other fast food companies too.