US military goes the green way 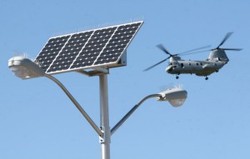 The US military is going all guns supporting its green program, from self sustaining bases to steam powered robots. Apart from there being obvious environmental reasons for this, there are also security reasons. During a battle situation, supplying fuel for vehicles at far off places is a major task which requires a lot of resources. Also, if a base is powered by renewable energy and is self sustained then it will be much less affected when under attack. To make this happen, the military has set goals such as having all shore based installations powered by renewable energy, making the net energy usage of half the installations zero and powering 50% of all vehicles, ships and aircrafts by renewable sources of energy by 2020.

It has also started acting on this scheme by implementing various eco friendly schemes at many of its bases. Let us hope, this will set an example for militaries of other countries all over the world.
[nctimes]