US Military decides to cut fuel and go green 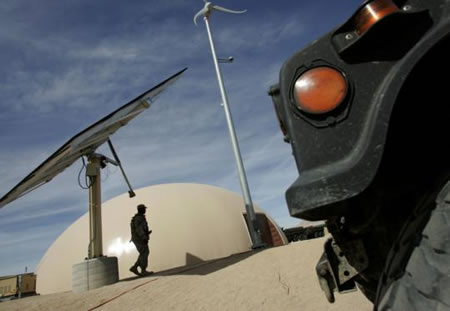 Not only civilians but the military also worries about their fuel consumption event though warfare is more of their policy than peace and even though bombshells and rockets don’t cause any sort of pollution. According to a research American forces in Iraq and Afghanistan are using more fuel each day than in any other war in US history. A dome shelter at Fort Irwin in the Mojave Desert draws power from solar panels and a wind turbine to save fuel. Inside a futuristic-looking dome that rises from the sandy wasteland of the high Mojave Desert, soldiers in plywood cubicles work at computers powered by solar panels and a towering wind turbine. Plug-in cars shuttle the troops across the vast expanses here at Fort Irwin in San Bernardino County. At night, tents lined with insulating foam provide a cool retreat at the end of a 100-degree day.

The desert base, which houses the Army’s premier training center for troops headed to Iraq and Afghanistan, has become a testing ground and showcase for green initiatives that officials estimate could save the services millions, trim their heavy environmental “bootprint,” and even save lives in the war zones, where fuel convoys are frequent targets.
[Boston]