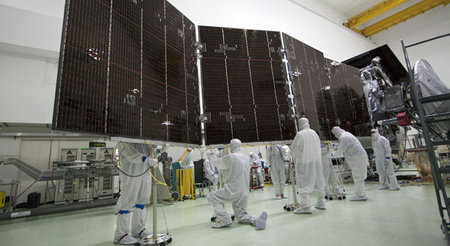 NASA is all set to send Juno hurtling into space to Jupiter. And no, we aren’t talking about the whining orange-juice-drinking pregnant teen. Juno’s a solar powered state-of-the-art spacecraft that NASA will soon send out to Jupiter in an attempt to know the planet a bit more and collect information regarding its origins, structure, atmosphere and magnetosphere as it circles 30 times around the planet’s poles. NASA has just finished testing three giant solar panels that will be hooked up to the Juno and power it up once deployed. These 2.7 meters wide (9 feet) and 8.9 meters long (29 feet) will only generate about 450 watts of electricity.

Now that might seem a disappointingly low amount of energy generation. What matters more though, is the fact that these solar panels are farther from the sun than they would be if placed on the earth, where energy generation would mount up to 12 to 13 kilowatts!
[JPL.Nasa]