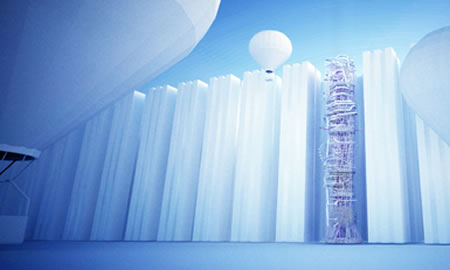 We all love theme parks, for the rides, the entertainment, the food, and mainly, for all the fun we have there. And theme parks as we know them today are spread out over huge areas, covering up loads of space in the bargain. A space saving technique, with no compromise on the whole theme park experience was suggested by designer Ju-Hyun Kim, a New York based Architect. Vertical theme parks or theme park skyscrapers, as the designer refers to them could just be the future of amusement parks. The design packs loads of benefits, having a lesser environmental impact. Building amusement parks vertically takes lesser space and in the bargain, creates a smaller footprint. The skyscraper theme park will change the concept of an amusement park layout, making it a lot more exciting, taken that it’ll be built stacked up at a height.

Different rides at different levels and a free-fall rollercoaster? That sure sounds like fun!
[WorldArchitectureNews]