Self-sustained Green Leaf hotel generates as much energy as it uses! 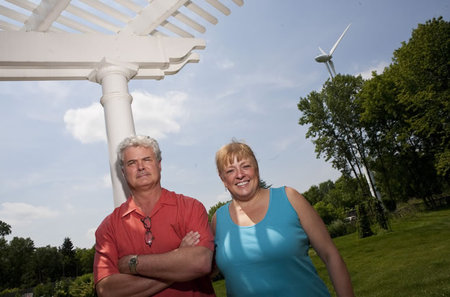 Contrary to your beliefs, the United States of America doesn’t really play home to a bunch of green hotels. In fact, the first hotel that produces as much energy as it uses, will swing its doors open in Delavan soon. And you would’ve thought that a country as big as the US of A would probably boast a few more eco-friendly environment-hugging vacationing spots; sadly it isn’t so. The first of its kind and probably the greenest in the nation, the 19-room Green Leaf hotel might not be as big as one of those biggies you just visited, though it sure as hell is a lot greener! A dream come true for Fritz Kreiss and his wife, Catherine McQueen, the Green Leaf hotel boasts a 30,000-gallon underground tank to store rainwater used for filling toilets and watering the landscape, wastewater treatment systems, a charging station for battery-powered cars and energy-efficient suites that cut off power supply when guests step out. And to generate all the energy it requires, the Green Leaf hooks on to a bunch of solar panels, wind turbines and a geo-thermal energy generating system too! A working inspiration for other hoteliers around, we wouldn’t mind laying back in a green hotel as such either!
[JSOnline]